If you are watching Gynvael’s EN streams, you know what it’s all about. After every stream, Gynvael is publishing one mission aka easy CTF task. And here is my “writeup-wannabe” for challenge number 009. Honestly that was the hardest challenge made by Gynvael. I love it, and wait for more!

XOR schould never be considered as an encryption… Unless it’s OTP. There is a lot of usefull infromation about OTP, if you need small introduction please start with click and follow links in foot section of this article. The most important thing to remember is that without key, we cannot retrive this encrypted message. As I mentioned previously in my other Gynvael’s wirteups, XOR has reallu fun feature: given E - encrypted message, M - message, K - key: K^M=E but also E^K=M and E^M=K

But fortunately under this link https://goo.gl/ZwSwPS there is a binary file with cipher implementation.

I will use radare2 setup for analysis.

and i command will give basic information (like rabin2 -I mission009.o)

This is an output: 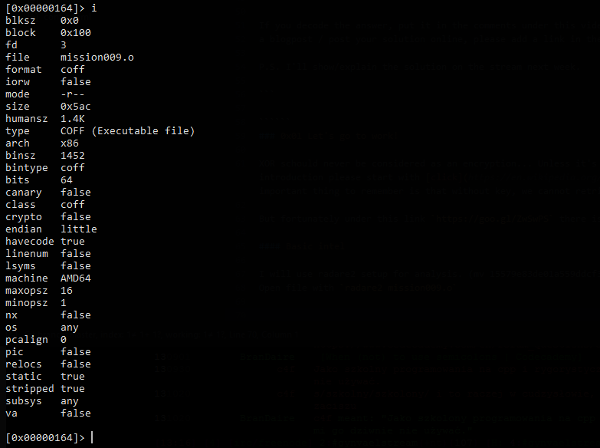 Good for us, no anti-RE stuff was used, no encryption but binary is stripped. This is a *.o file, you can read about them here Object files.

strings command will also give us some usefull information: 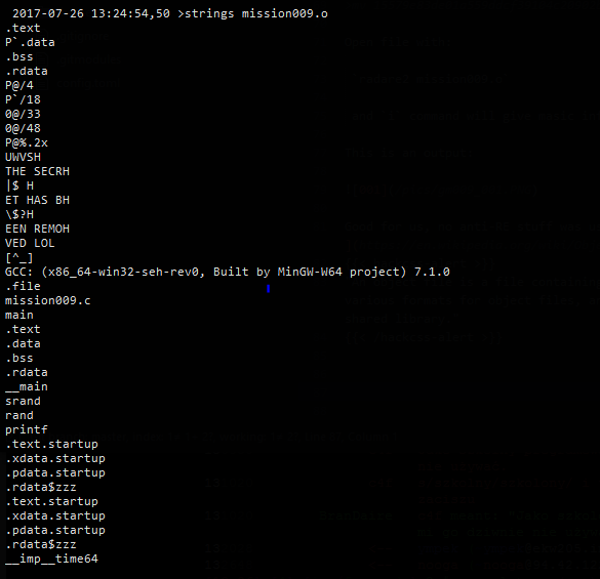 And what’s more important some tip:

It’s time to look inside that code!

Let’s see what do we have inside. There is a lot of tools to do this, but due to my long struggle to master radare2, it will be my toolchain of choice. This dump was created by set of commands: ([0xXXXXXXXX] is the prompt)

Ok, that’s a very huge image. But I like it! Fortunately I do not have to do PrtScr screen by screen in my terminal.

General analysis of first two blocks, gives us general view of key generation. In first block, some strings (shown by strings command) are stored in the memory, then funciton _time64 is callend and then function srand is called. Key generation (second block) depends on system timestamp, so the time since January 1, 1970. That’s a lot of values to check, but what came to my mind was that date in mission description.

This was the only one time, when so called agents mentioned date in their message. This might be a lead (of course it could be misdirection too), but I’ve assumed, for security, probable timestamp would come from the interval (12 july 2017 21:00, 19 july 2017 21:00). So time period between Gynvael’s streams 25’s and 26’s, because for me this is the most probable time of origin of this mission. 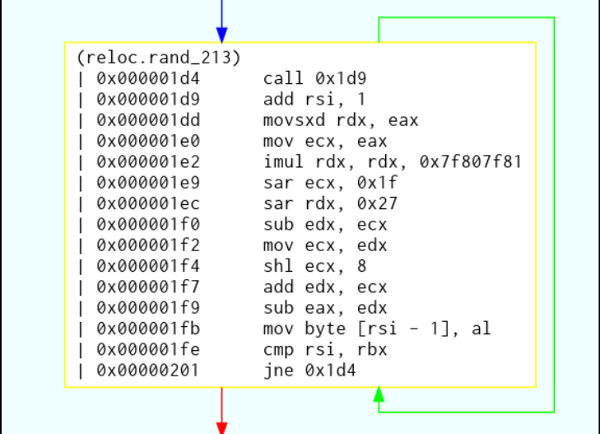 Shows the loop of key generation. The key is then xored with message and… that’s it, then there is this OTP message we are trying to decrypt.

Each call of rand() function, gives us another state od pseudo-random number generator. What’s important, pseudo-random function in C/C++ is not cryptographically secure, end with given seed (first, initialization value) we can reproduce value by value. In glibc (used by gcc) is called LCG. What’s more, when given enough of generated numbers, there is really easy way to retrive ALL random numbers in seqence and next values that will be generated in the future! But it’s not the topic of this task.

The function flow goes this way:

This values comes from converting them in radare2 from hex to dec.

Ok, so no the task becomes to be easy… We have tu guess timestamp. How to do this? In probable-timestamp period for each timestamp we generate all 32 values and create probable key. After xoring with message if all given data is printable that migh be the key. Remove all garbish looking output and tadadadadam!

The message is…. Who needs to store keys anyway.

That’s all. Thank you for your attention. To the next time! /me bye!

My comments operate on free Heroku instance. If there is no traffic in 30 minutes the dyno service goes asleep. That causes a small delay in submitting your comment. Thank you for your patience ;)

Your comment has been submitted and will be published once it has been approved.